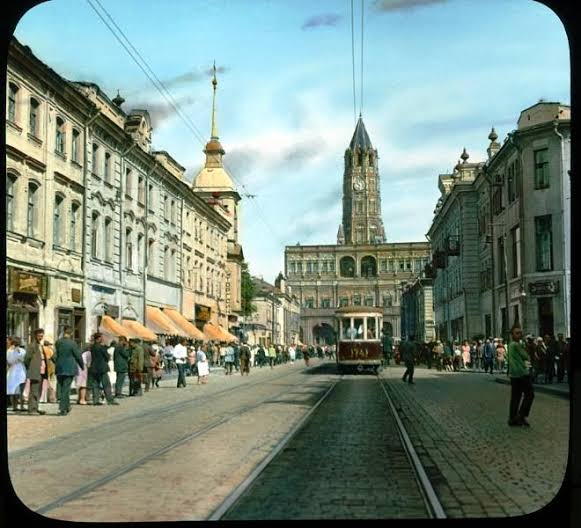 The Sukharev Tower is a unique monument of Russian architecture, which no longer exists today, but it lives in the memory of the people, in paintings and in books.

The history of the Sukharev Tower in Moscow began in the seventeenth century. It built in 1692-1695. The initiator of the construction Peter I, and the project developed by M.I. Choglokov. The location of the tower chosen at the intersection of Sretenka Street and the Garden Ring. First, the lower floor erected – it was formed by two boards with a passage.

A tent pedestal arranged above the vaulted ceiling, and on it one could see a battle clock. At the corners it decorated with four pointed turrets, the shape of which resembled the superstructure of the Kremlin’s Trinity and Spasskaya towers. The third floor almost completely smoothed the base of the already existing low tower, so it decided to build a fourth tier as well.

In the years 1698-1701, the tower reconstructed and acquired the form in which it survived until the beginning of the twentieth century. The main element of the building was a tent, thanks to which the tower resembled a Western European town hall.

The architectural style of the Sukharev Tower combined Lombard and Gothic elements. She was an example of the Naryshkin architectural style. The structure remarkable for its incredible strength, which achieved due to the deep foundation. The total height of the tower reached sixty meters. The people christened her the bride of the Ivan the Great Bell Tower.

The appearance of the Sukharev tower resembled a ship with a mast. Its eastern part symbolized the bow of the ship, and the western part symbolized the stern. A clock installed on the tower, and a double-headed eagle adorned the top. His image original – arrows located around his strong paws, it believed that they symbolized lightning. In Russia, the Sukharev Tower became the first civilian structure of this scale. Previously, only church bell towers built so high.

The symmetry of the structure typical for all tiers, except for the lower one: here the asymmetrical arrangement of the staircase-entrance balanced by different arches – to the west of the central passageway by two large ones and to the east of it by three small ones. The Sukharev Tower became an important link in the transition to the architecture of modern times and the result of the development of ancient Russian architecture.

In 1701-1715, the astronomical observatory of Ya.V. Bruce and the School of Navigation and Mathematical Sciences. Subsequently, the building transferred to the Moscow office of the Admiralty Collegium, which began to use it as a warehouse. During the reign of Peter the Great, signed foreign actors performed comedies here.

In the years 1829-1890, the tower housed the reservoirs of the Mytishchi water supply system. In 1926, the Moscow Communal Museum began to work in the building. Eight years later, in connection with the reconstruction of the square of the same name, the Sukharevskaya tower demolished, as it interfered with tram and car traffic.

In the nineteenth century, every guest of the capital considered it his duty to pray at the Cathedral of Christ the Savior, visit the Ivan the Great bell tower and the Sukharev tower. The structure shrouded in many legends. Almost all the secrets of the Sukharev Tower somehow connected with Ya.V. Bruce – a faithful ally of Peter I and the author of the Brusov calendar, which for two hundred years was the main Russian agricultural reference book. Legends say that meetings of the secret society “Neptune” (the society of Russian freemasons) held in the rapier hall, while Bruce himself called a warlock or a sorcerer from the Sukharev Tower.

At the beginning of the twentieth century, the dungeons of the Sukharev Tower thoroughly investigated – as a result, several underground passages discovered, directed towards Bruce’s estate.