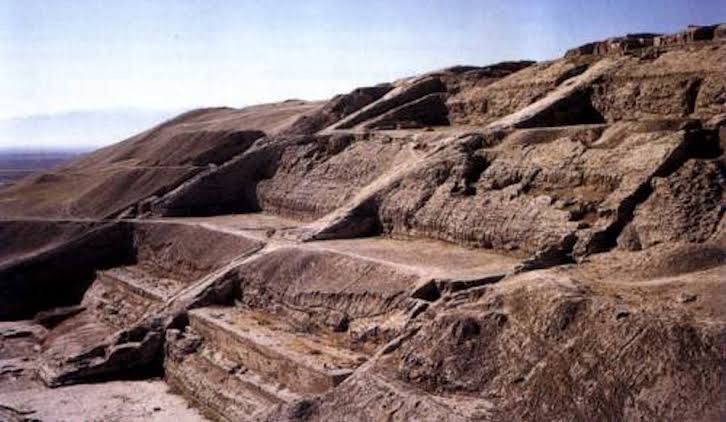 The French archaeologist D. Schlumberger, with his excavations on the Surkh-Kotal hill in the Kunduzob river valley, 12 km from the city of Baghlana (Northern Afghanistan), discovered the remains of the temple complex, which became the subject of research since 1951.

The inscriptions found here made it possible to date it to the time of King Kanishka – the heyday of the Kushan kingdom.

A comparative analysis of the plans of the fire temples of the Achaemenid and Sassanid eras and the temple in Surkh-Kotal, as well as the presence of a two-meter layer of ash in the premises of tower 8, convinces D. Schlumberger that the monument he discovered is nothing but the remains of a fire temple.

The temple is located on a hill dominating the adjacent plain, within the boundaries of the city of Baghlan, the remains of the walls of which border the western side of the temple. The eastern slope of the hill, 75 m high, forms four platforms connected by stairs leading to the temple.

The temple (peripter) placed on the stylobate and the main facade is facing east. The square sanctuary (5 X 5 m) surrounded by a bypass corridor, its walls made of mud, up to 3 m thick.

The courtyard on the southern, northern and western sides fenced with thick U-shaped walls, along the walls from the inside there a colonnade, where painted clay statues were found.

The courtyard wall was the architectural background for the temple, which is in the center of the composition. The southern part of the courtyard built up with a small temple complex that develops outside the wall, organically connected with the main one through an arched opening in the wall.

On closer examination of the plan of the monument, some questions arise.

The rulers of the Kushan kingdom, being Buddhists, quite loyal to other religions; It did not exclude that Kanishka, and his entourage even supported the priestly estates of fire and star-worshipers, and the temple in Surkh-Kotal could be the pantheon of the gods of the astral cult and sacred fire.

Most likely the temple was: